“When you eliminate the impossible, whatever remains — however improbable — must be the truth!”- Doyle 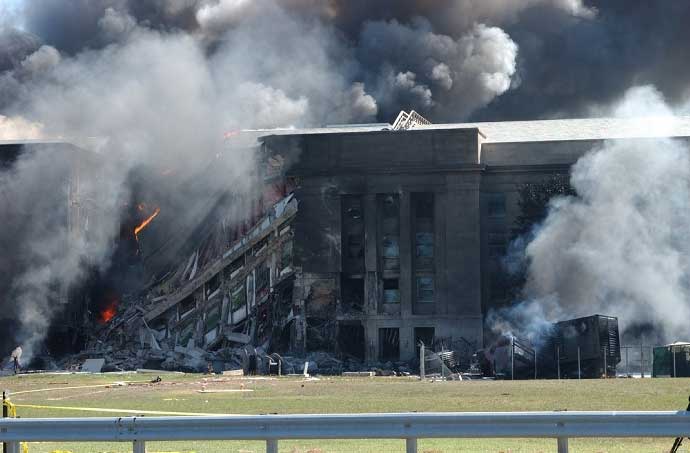 Almost nothing in the “official” 9-11 account proves to be factual. For all the purported U.S. failures; no one was punished – most were rewarded.

At the 9-11 Pentagon, the world witnessed a fire and suggestions of explosions. Airport fire trucks rushed to the scene of a purported “crash” site – without discovering an airplane. There is no viable evidence of burning jet fuel. Just the statement, They say it was an airplane. The pre-collapse Pentagon section showed no ‘forward-moving’ damage. The damage is at the wrong location. The expected “crash” damage doesn’t exist. There was no particular physical evidence of the expected “wreckage.” There was no tail, no wings; no damage consistent with a B-757 “crash.” Even the Pentagon lawn was undamaged! The geometry of the day certifies the ‘official’ account as a blatant lie. The few aircraft parts discovered at the Pentagon are highly suspect. The dramatic “witness” accounts lack supporting physical evidence – with the exception of those who described the incredibly few aircraft parts. All images show that the building wasn’t aggressively searched for survivors. Lacking any ‘expected’ clues, one is left to ask Who said this was an airplane crash, in the first place?

The purported Flight 93 crash site in Pennsylvania is quite similar.

Since 9-11, it was discovered that there was no expected Air Force fighter response. By all appearances, the expected fighters were held back from interfering with; or witnessing the unfolding events. The fighter onboard electronics would have not only offered an intercept target, but would have displayed and recorded the forbidden reality of the day. Of particular interest would be the fate of two obviously missing airliners.

The alleged hijackers apparently were not on board the aircraft! Their names were not on any passenger manifests – yet shown. The ‘names’ of at least seven of the alleged hijackers were discovered to be still alive – with no questions being asked about whom the real hijackers were. No attempt has been made to discover the “known terrorists.” There were at least four hijackers — all evidence pointing to their being highly qualified jet pilots – not zealous Arab wannabes.

As the names of “al Qaeda” and “bin Laden” continue to be pandered in the shadows of ‘terrorism,’ journalists continue to discover that the bin Laden family was given the treatment of royalty, immediately following 9-11.

The legacy of 9-11 is that America – and its Constitution – is far more threatened from the White House, than the caves of Afghanistan.

This site pleads for the preservation of the U.S. Constitution, the admirable American sense of justice and the proud traditional American way of life.

Blind faith is self-inflicted! Whenever confusion is encountered, it is necessary to somehow find a grounding point,”call it a benchmark.”That undeniable and absolutely trustworthy point of reference. Next, it’s necessary to gather ACCURATE peripheral data, which can be trusted – no matter how kind or how harsh it may be. Thereafter, whether lost in the woods – or in politics- the truth may be discovered. Such is the case with 9-11.

The “official version” of 9-11 just doesn’t stand up, against even elementary scrutiny. Despite the “official” denials, there were overwhelming warnings of suicide hijackers; but no warnings to the public or to airline pilots. The selective maintenance of a badly outdated hijacking procedure set the operational stage for the “official” version of 9-11.

A little bit at a time, America – and the world – is taking a step back to examine 9-11, 2001 for what is factuallyrepresented:

For the most dramatic impression, let’s start with the scene of the 9-11 Pentagon —

A fire and apparent explosion. The airport fire trucks rushed to the scene, failing to discover any evidence of an airplane. Examining the photos and videotape of the day, it’s obvious that the fire is neither competently fought (if the “official account is the least bit accurate), nor is the target building aggressively searched for survivors by the supposed rescuers. A secret facility with no security; before, during or after. An attack on the nation’s military headquarters — with no police or military perimeter set up. Hundreds of casualties anticipated; without a consistent ambulance response. All the rescue assets are on location, but held back from the fire scene.

One is challenged to discover how much more could be wrong in such a picture.

Disregarding passionate and otherwise tempting lies, the only truth which can be trusted in the “official” account of 9-11, is that two aircraft hit the WTC towers. The rest is an incredible collection of clever lies and obstruction of truth. “I didn’t SAY it; I repeated it” doesn’t equate to telling the truth. Especially when the information ’sources’ keep their jobs.

While it stretches anyone’s imagination, it is appropriate to examine the extent of where the selective airline security procedures left America — and the world. By all indicators, the American airline industry is set for another 9-11. Airport security has gone from being a joke to a being a Gestapo joke.

Again, there’s that peculiar nagging issue, concerning 9-11 – the alleged hijackers apparently were not on board the aircraft! Their names were not on any passenger manifests – yet shown. The names of at least seven of the alleged hijackers are still alive – with no questions being asked about who the real hijackers were. Obviously, there were at least four hijackers. We may be certain that they were highly qualified jet pilots – not Arab wannabes.

To even begin to comprehend what happened on 9-11, one has to first observe that all warnings of 9-11 were blocked with great prejudice. Thereafter, it must be noted that there were no official repercussions against those who, by accident or design, facilitated 9-11 – as pandered to the world. No reprimands, no resignations, no investigations at any office or departmental level, certainly no prosecutions. Not even an official name-calling session. Just the seeming statement, “Damn, I hate it when that happens!”

Thereafter any “official” investigations into the details of 9-11 are blocked – from the White House!

The events of 9-11 didn’t just kill thousands, cost billions and precipitate wars – nay, War Crimes – pursuant to the U.N. Charter, the Geneva Accords and the Nuremberg Precedents, which the U.N. Charter embraces. Conveniently, few American citizens or soldiers have the faintest clue as to what those documents say. Ignorance can be as effective as a lie! The post 9-11 events injected both horror and compelling questions upon the American population, in particular. History will be America’s jury; the verdict is quite obvious.

Disregarding raw American pride, patriotism and prejudice; War Crimes DID happen from America! At the time of this writing, they continue.

The 9-11 Pentagon epitomizes the issues of that day. As time goes on, certain issues persist in their demand for hard answers.

As it stands, the U.S. “powers” are going around the world meting out Gestapo justice in secret trials. Such is even proposed by the current President, exclusively naming him – personally; not his office – as the ultimate authority in the post 9-11 Presidential Military Order on terrorist tribunals.

Amazingly the President reserves the right to try “unlawful combatants,” while sanctifying U.S. corporations farming out mercenary (unlawful combatant) forces in places such as Afghanistan and Iraq. Somehow the world is expected to make a distinction between “mercenary” and “contractor.”

There was no shortage of authority or power in the Constitution to prevent 9-11; it cannot totally prevent massive and methodical corruption; it can punish such deeds – including the related conspiracy. The necessary investigation powers were in place; before 9-11. The so-called “whistle blowers” got the shaft; 9-11 came from within!

The obviously pre-written “Patriot Act” was totally unnecessary; and an act of pure tyranny. Those in doubt of the previous statement need to observe cases such as Martha Stewart, who were charged with a crime, for having entered a “not guilty” plea at their trial. She wasn’t alone; that’s “tyranny,” as America knows it.

In order to preserve the American way of life, one must look very closely at the events of 9-11. The missing information is more compelling than what has been pandered as “truth.” If those actually responsible are not brought to justice, America is in dire straits.

Returning to that day …

Given all the “mysteries” surrounding 9-11, it is necessary to refer to Sir Arthur Conan Doyle’s philosophy:

“When you eliminate the impossible, whatever remains — however improbable — must be the truth.”

For anyone to understand how bizarre their world can get, it is at least “interesting” to start with certain basics at the Pentagon and Flight 77. Among the alleged “wreckage,” no tail, no wings, and no damage consistent with such a “crash.” Even the Pentagon lawn was undamaged; so much for the infamous security videotape fireball!

Seismic monitors will register a sonic boom, but the seismic monitors don’t reveal anything suggesting such an aircraft impact. ONLY AT THE PENTAGON!

The strongest suggestion is that the wrong seismic time frame was cited, relative to the actual impact. What would ‘other’ data show? What happened in the vicinity of 9:31?

What appears to be molten steel pours from a fracture in the wall of WTC south tower. Steel melts at 2500 F. The only other known sources of heat on that day were jet fuel, (which burns at 1500 F) and office fires (which burn at an even lower temperature, owing to oxygen starvation).